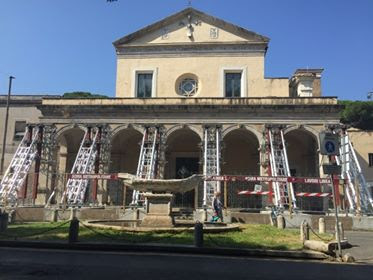 where: Via della Navicella, 10
getting there: bus 81 from Piazza Venezia/10 minute walk from Metro stop Colosseo
open: not available


Santa Maria in Domnica is a minor basilica on the Celio Hill, not far from Santo Stefano Rotondo.
The first records of a church being on this site date to the 5th century.
The church was named for la Navicella, the small stone carved boat in front, which was a copy of a statue found nearby and turned into a fountain by Pope Leo X during the redesign of the church in the 16th century.

The interior of the church reflects the 9th century design, with stunning mosaics in the apse commissioned by Pope Pascal from this time.
The three large frescoes in the main altar, underneath the apse, were painted by Lazzaro Baldi in the 17th century.
The frieze frescoes around the upper nave walls date to the 16th century restoration and were painted by Perino del Vega and designed by Giulio Romano, who studied under Raphael.
Carved and painted onto the wooden ceiling are papal and Medici family heraldry showing the financial contributions of the Medici family and Pope Leo X. The design includes ships, fleur-de-lis, lions and the Medici palle.

At present (2020) the church opening hours are affected by the works of metro Line C and the exterior is surrounded by scaffolding to protect the church from damage.