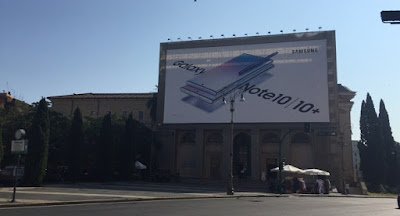 While visiting San Giovanni in Laterno another interesting place to see is in a building just across the street in the Piazza di San Giovanni in Laterano.
Once part of the old Lateran Palace this structure was created in 1589 to protect and surround a medieval chapel that was used privately by the Popes, and the twenty-eight white marble steps called the Scala Sancta.
The staircase was bought to Rome from Jerusalem in the 4th century by Saint Helena the mother of Constantine and legend says that these were the steps that Jesus descended in Pontius Pilate's palace after Pilate washed his hands of Christ.

Today the Scala Sancta is a holy site for the Roman Catholic faithful to visit, where thousands come to climb the sacred stairs on their knees in prayer.
Pope Innocent XIII, in 1723, encased the holy stairs in walnut wood to protect them from damage.
In 2020 the staircase underwent a restoration and the wooden coverings were removed from the marble steps for the first time in three hundred years.
For a short period the original marble steps could be climbed by those in an act of penitence.

On either side of the holy staircase are two replica staircases that can be walked up, these lead to the Chiesa di San Lorenzo in Palatio and the Sancta Sanctorum (Holy of Holies).
The fresco cycles depicting Events of the Passion of Christ on the staircases are by a team of leading artists working in Rome in the 16th century led by  Cesare Nebbia and Giovanni Guerra which included Giovanni Baglione, Cherubino Alberti, Pail Bril, Paris Nogari Avanzio Nucci and Giovanni Battista Pozzo. The frescoes were completed in 1589.

At the top of the staircase, on the landing, is a large fresco of the Crucifixion by Cesare Nebbia, the doorway underneath leads to the Sancta Sanctorum.

The Sancta Sanctorum, the chapel of the Popes, was decorated by the same group of artists in the 16th century but during a renovation (completed in 2020) it was decided to remove these frescoes to reveal the earlier frescoes from the 13th century that were underneath.
The wooden reliquary under the altar was placed there by Pope Leo III in the 9th century to house the bones of thirteen saints. The relics have been transferred to the Sacred Christian Museum in the Vatican Library and supposedly includes the heads of Saints Peter and Paul.
The Icon of Christ was painted by Saint Luke and completed by an angel according to myth.

The entrance to the church of San Lorenzo in on the right at the top of the stairs.
The ceiling vault frescoes depict The Glory of the Trinity and have recently been restored to their original splendour.
In the Chapel of Saint Lawrence the altarpiece, The Apotheosis of Saint Lawrence, is attributed to Baldassare Croce.

The entrance to the Cappella di San Silvestro, which is the choir chapel, is on the left of the landing.
The vault frescoes and heraldry decorating the room depicts the Papacy of Pope Sixtus V and was frescoed by brothers Giovanni and Cherubino Alberti.