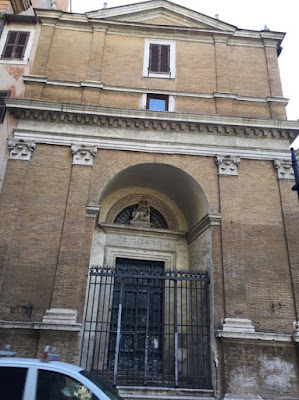 where: Via di Ripetta, 63/opposite the Accademia di Belle Arti
open: unavailable
getting there: short walk from the Mausoleum of Augustus


Santa Maria Porta Paradisi is on the corner of Via Antonio Canova and Via di Ripetta in the neighbourhood of Campo Marzio.

The church was built in the 16th century and named for the Gates of Paradise as it was near to a hospital dedicated to helping people sick with the incurable disease (syphilis).

In the portico, above the church door is a marble relief of the Madonna and Child attributed to Andrea Sansivino dating to the time of the church building.