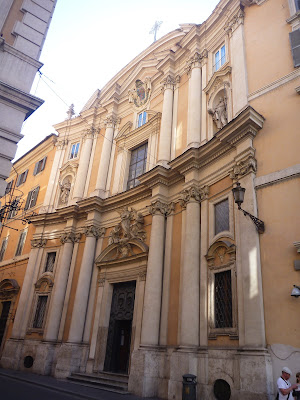 Santissima Trinità degli Spagnoli is an 18th century late Baroque church built for the Trinitarians of Spain.
Building of the church first began in 1732. Portuguese architect Emanuel Rodriguez Dos Santos was commissioned by the Order of the Most Holy Trinity for the Redemption of Christian Slaves to design the church with help from Giuseppe Sardi, but disagreements between the order and Santos saw the interior completed by Spanish architect Josè Hermosilla y Sando.

The church interior is decorated in gold, stucco and trompe l'oeil marble pillars with the nave vault and choir nave frescoes by Gregorio Gugliemli from the mid 18th century.
The altarpiece of the Holy Trinity and Slaves at the main altar is by Rococo painter Corrado Giaquinto.