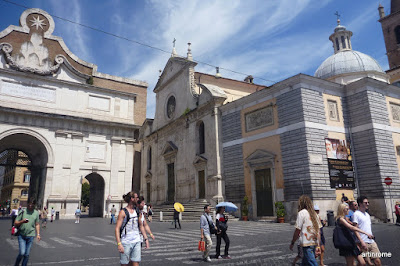 getting there: metro linea A/Flaminio
information: don't wander in the church while mass is being held (mass times are displayed at the entry)

Santa Maria del Popolo is one of my favourite churches to visit in Rome.
The church was first built in 1099 by Pope Pascal II after his vision of the Madonna. She asked him to build a church to rid the area of the evil spirits caused by the ghost of Emperor Nero, the persecutor of Christians.
The church was rebuilt in the 15th century and later decorated with artworks by Caravaggio, Raphael, Carlo Maratta and Bernini.

In the Cerasi Chapel are two paintings by Caravaggio on the chapel's left and right walls. The Crucifixion of Saint Peter and the Conversion of Saul were painted on large canvases and date from 1602.
The altarpiece of the Assumption of the Virgin is by Annibale Carracci and was painted around the same time. Carracci also painted the chapel's vault frescoes. (The chapel is quite dark and can be lit with a €2 coin to see the paintings)

Raphael designed and decorated the Chigi Chapel for Agostino Chigi in 1513. It was completed by Bernini in 1652 for the Chigi Pope Alexander VII.
The chapel holds two of Bernini's statues, Habakkuk and the Angel and Daniel and the Lion. The altarpiece of the Nativity of the Virgin is by Sebastiano del Piombo.
The church apse was designed by Bramante and the vault frescoes, and the frescoes in the Della Rovere Chapel are by Pinturicchio. 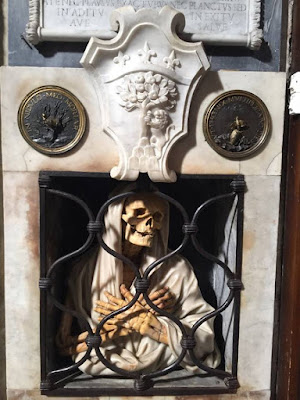 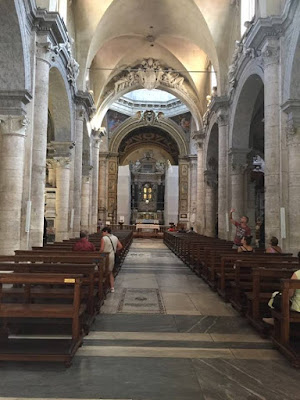