Michelangelo Merisi da Caravaggio 1571-1610
Michelangelo Merisi was a Baroque artist known as Caravaggio, named after the town where he was born. When he was very young his father, grandfather and uncle died from the plague, leaving his mother a widow to bring up four children.

In 1584 he entered the workshop of Simone Peterzano in Milan and by the time he was twenty he was working in Rome at the studio of Giuseppe Cesari painting still-life fruit and flowers.
Caravaggio was often in trouble with the law for brawling with other painters, soldiers, labourers or police officers.
In 1594 he appeared amongst the employees of Cardinal de Monte whose household he stayed with until 1600. The cardinal introduced him to Roman collectors including the Barberini Family.
During this time he painted Sick Bacchus and Young Boy with Basket of Fruit and received his first commission, the decoration of the Contarelli Chapel in the church of San Luigi dei Francesi.
In 1605 he was in trouble with the law, escaping to Genoa after wounding a scribe and again in 1606 after murdering an acquaintance during a racket match. He escaped to Naples and while here he painted the seven works of the Mercy of the Madonna and the Madonna Rosario. Caravaggio, a fugitive, could have been captured and executed anywhere in Italy and he waited in vain for a pardon from the Pope. He left for Malta where he painted the Beheading of John the Baptist, was captured and then fled to Sicily, returning to Naples in 1609, he was assaulted and wounded in a tavern brawl and then finally received his pardon and could return to Rome only to die during the voyage. He was not yet 40 years old. 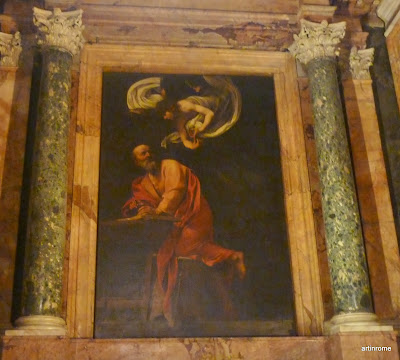 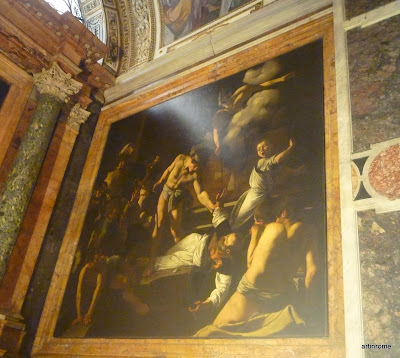