Federico Zuccari c. 1542 - 1609 Taddeo Zuccari 1529 - 1566
Taddeo and Federico Zuccari were born in Sant' Angelo Vado in The Marches and were taught to draw by their father. When Taddeo was 14 he left for Rome alone, where he studied other artists' works and was employed in various workshops.
Federico's documented career began in 1550 when he was invited to Rome to work with his brother who was already an established artist.
The brothers worked together on projects at the Vatican and when Federico was eighteen he was commissioned to paint the Transfiguration, the Marriage at Cana and other scenes from the Life of Christ in the Casino of Pius IV.
In around 1556 Taddeo painted scenes of the Passion for the Mattei Chapel in Santa Maria della Consolazione and worked on the frescoes of the Life of Saint Paul in the Frangipani Chapel in San Marcello al Corso, painted mostly in 1560 and completed by Federico.
Taddeo died in 1566 and is buried in the Pantheon.
Federico worked not only in Rome but also in Venice and Florence where he was admitted into the Accademia del Designo.
In 1570 he travelled to Orvieto and painted Christ Healing the Blind Man and Christ Raising the Son of the Widow of Nain for the Orvieto Cathedral.
In 1574 he travelled to the Netherlands, Spain and England painting a portrait of Mary, Queen of Scots and a drawing of Elizabeth I, when he returned to Florence later that year he completed the fresco of the Last Judgement in the cathedral left unfinished by Vasari.
In 1581, on his returned to Rome to continue work on the Pauline Chapel, he was temporarily expelled by his patron, Pope Gregory XIII after offending his critics in court with a satirical painting in the Porta Virtutis.

He returned to Rome only after his friends and other patrons secured a pardon from the Pope and then resumed his work on the Pauline Chapel.
Federico died in 1609 not long after becoming a Cavaliere.
His house in Rome, Palazzo Zuccaro, which he designed with a doorway in the form of a grotesque face and matching windows either side was used as a headquarters for the Accademia di San Luca founded in 1583 and is now Biblioteca Hertziana. 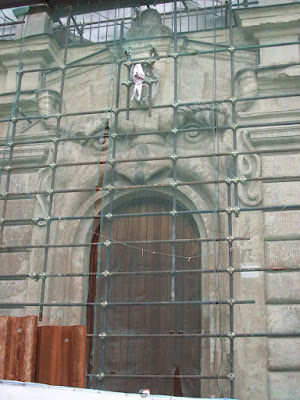 Vatican
Sala Regia
in Casino Pius IV:
Transfiguration
The Marriage at Cana
Scenes from the Life of Christ
in Pauline Chapel:
fresco of the Baptism of Cornelius
Arms of Gregory III
The Pentecost
The Mission of the Apostles
Il Gesù
The vault and altarpiece Cappella degli Angeli
Santa Sabina
frescoes of scenes from the Life of St Hyacinth
Frescoes vault in the Chapel of S. Giacinto
Trinità dei Monti
San Marcello
San Lorenzo in Damaso
Altarpiece of the Coronation of the Virgin with Saints Lawrence, Paul, Peter and Damasus
Santa Caterina dei Funari
Conversion of the Empress Faustina
The Disputation of Saint Catherine
Christ Driving the Money-changers from the Temple
Ecco Homo
Santa Lucia del Gonfalone
decorative cycle of the scenes of the Passion (with Jacopo Bertoia and Raffaellino da Reggio and others)
Santa Maria dell'Orto
Orvieto Cathedral
Christ Healing the Blind Man
Christ Raising the Son of the Widow of Nain
Villa d'Este Tivoli (for Cardinal Ippolito II d'Este)
ceiling decoration of the Sala della Fama and Sala della Gloria
Villa Farnese Caprarola