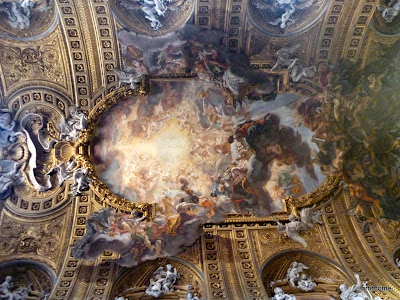 I love walking around Rome and visiting the churches that I've read about and I especially fell in love with Baciccio, the Baroque artist, when I first saw his trompe l'oeil ceiling in il Gesù.
Il Gesù is a 16th century church that belonged to the Jesuits and it is located two streets from Piazza Venezia and on the bus route that takes you along Corso Vittorio Emanuele II.
The ceiling was created in 1678 and it is a stunning illusion named the Triumph of the Name of Jesus. The ceiling glows with the fresco and gilded stucco which can be seen more easily with the large mirror placed on the church nave floor that reflects it. 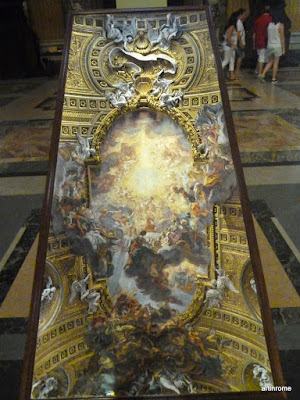 Two streets north behind the Pantheon, in a small piazza, is another Baroque church called Santa Maria Maddalena and in the Chapel of St Nicholas Bari is an altarpiece by Baciccio showing the Vision of Nicholas from 1698. I love this small church but it only seems to be open in the mornings and closes at midday.


Heading back onto the Corso and down Via dei Santi Apostoli, is the church of Santi Apostoli. In this dimly lit church is one of Baciccio's last works, the ceiling fresco of the Triumph of the Order of Saint Francis from 1701. The church is very dark and it is hard to see some of the details and flash photography is not allowed in here.