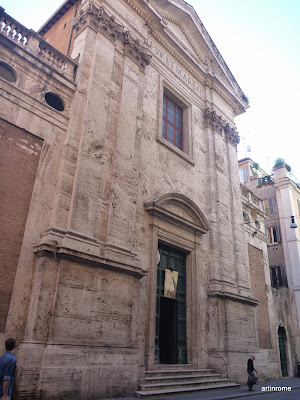 Gesù e Maria is a Baroque church just a short walk down the Via del Corso from Piazza del Popolo. It was dedicated to the Holy Name of Jesus and Mary and built between 1633 and 1636 for a Counter-Reformation movement of the Augustinians, called the Discalced Augustinians — which meant barefooted, although they did wear sandals.

The interior, completed in 1687, was decorated with ornate polychrome marble, golden stucco, frescoes and statues funded by wealthy patrons who wished to be buried in the church.

Baroque marble funerary art depicting Father Time and skeletons decorate the tombs of the Corno family by Ercole Ferrata and Domenico Guidi, who belonged to the studio of Bernini.

In 1680 Giacinto Brandi was commissioned to began work on decorating the nave vault, painting scenes depicting The Apotheosis of Our Lady with the Four Evangelists.
He also was appointed to paint the main altarpiece of The Coronation of Our Lady and the Holy Family in the second chapel on the left.

In the sacristy are paintings and the altarpiece of The Immaculate Conception by Giovanni Lanfranco. 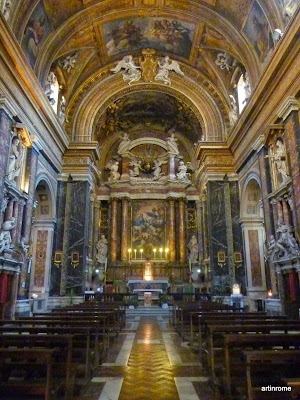