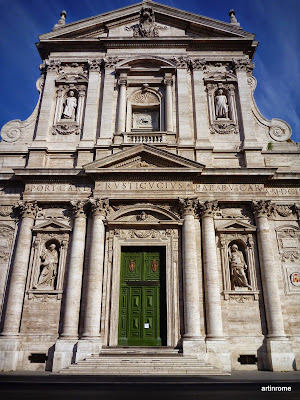 where: Via XX Settembre, 14 (Piazza San Bernardo)
getting there: metro - linea A/Repubblica or Barberini
open: the church has been closed since 2013 due to extensive damage to the ceiling inside


Santa Susanna is a 17th century church not far from the Fontana della'Acqua Felice and the church of Santa Maria Vittoria on Via XX Settembre.
The church was rebuilt and restored between 1585 and 1603, with the Baroque facade designed by Carlo Maderno, who was also responsible for the nearby church of Santa Maria Vittoria.
The church was built on a site of a previous 3rd century church dedicated to the martyred saint Susanna.
Inside the church are frescoes in the central nave by Baldassare Croce, dome and apse frescoes by Cesare Nebbia and the high altar main altarpiece of the Beheading of Susanna by Tommaso Laureti.