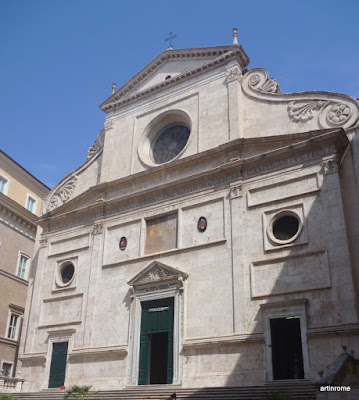 It was just before noon that we wandered into Sant'Agostino. Only a few people were lingering in front of the first chapel on the left looking at Caravaggio's 1609 painting of the Madonna dei Pellegrini, so we didn't have to stand amongst the crowds that I was expecting and although the chapel is quite dark, it can be illuminated with a coin for a better view of this famous altarpiece that was a first thought to be unfitting for the church as it showed pilgrims with bare and dirty feet,visiting the Madonna and Child.

Not only does Sant'Agostino hold the Caravaggio altarpiece but it has works by Raphael, Guercino and Giovanni Lanfranco.

The church was completed in 1483 and was one of the first Roman churches constructed during the Renaissance. The facade was built with travertine marble believed to have been taken from the Colosseum.

In the right transept, in the Chapel of St Augustine, is  Guercino's canvas of Saints' Augustine between Saints John the Baptist and Paul the Hermit and two canvases by Giovanni Lanfranco.

Raphael's fresco of the Prophet Isaiah (1512) is in the central nave on the third left pillar.

Jacopo Sansovino's 1516 sculpture, dedicated to the Madonna of Childbirth, is near the entrance of the church in the Chapel of Our Lady of Childbirth.

The church was also once noted for the number of courtesans and prostitutes in its congregation and holds the tomb of Fiammetta, the lover of Cesare Borgia, Pope Alexander VI's son.

An informative guide book on the art and history of the church can be bought inside. 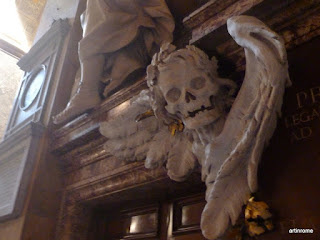 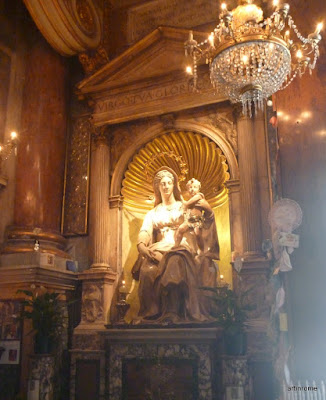