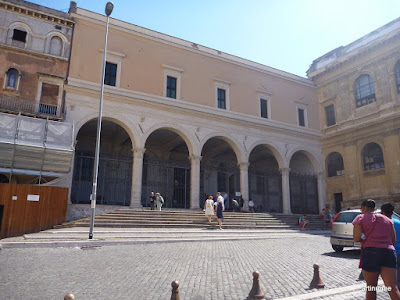 Not far from the Colosseum and the Parco del Colle Oppio is the Basilica of San Pietro in Vincoli.
A church was first built here in the 5th century and rebuilt over the centuries. In the 11th century it was dedicated to Saint Peter and from then on it housed the chains worn by Saint Peter before he was crucified.
The church is visited today mainly because it holds Michelangelo's Moses from 1513. Originally the Moses was designed to be a part of the forty statue funeral monument for Pope Julius II in Saint Peter's Basilica, but while still working on the tomb Pope Julius II commissioned Michelangelo to work on the Sistine Chapel ceiling instead. The tomb was reduced in size and replanned for Saint Pietro in Vincolo.
It is thought that Michelangelo depicted Moses with horns because of a wrong translation from the original Hebrew. The statues of Moses, Leah and Rachel, and Pope Julius II were the only other statues completed by him for the church. The statues of the Prophet and Sybil were by Raffaello da Montelupo and the Madonna and Child by Schierano da Settignano, followers of Michelangelo.
Other artistic works to visit in the church are Guercino's altarpieces, Saint Augustine, in the first chapel on the right and Saint Margaret (1644) in the chapel near the high altar.
The Deposition by Cristoforo Roncalli, is in the second chapel on the left and the frescoes from 1557 at the high altar by Jacopo Coppi.
Looking above is the beautiful nave ceiling, the Miracle of the Chains, frescoed in 1706, by Giovanni Battista Parodi.
A handy guide book is available in the bookshop inside the church. 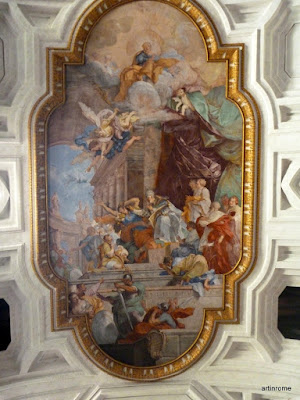