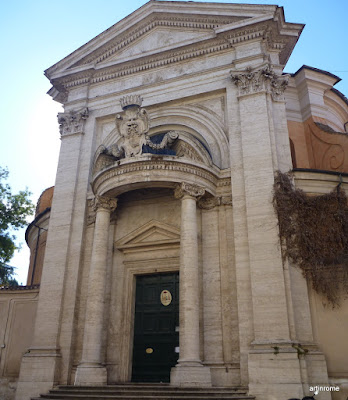 
Sant'Andrea al Quirinale is a 17th century Baroque church built for the Jesuits and dedicated to Saint Andrew the Apostle.
With Pope Alexander VII's blessing, Cardinal Camillo Pamphilj commissioned Gianlorenzo Bernini to design the church which was finished in 1678.

The facade of the church is limestone and has the Pamphilj family coat of arms of the dove, and Saint Andrew's symbol, the scallop shell.

The oval interior of the church is decorated with pink and white, and green and white marble walls, gilding and white stucco.

The main altar, designed by Bernini, has stunning stucco work and bronze gilding by Antonio Raggi.
The altarpiece painting of the Martyrdom of St Andrew is from 1668 by French painter Guillaume Courtois (nicknamed il Borgognone).

The chapel of the Passion has three canvases by Giacinto Brandi from 1682, again the ceiling fresco is by Filippo Bracci.

In the chapel dedicated to Saint Ignatius Loyola the altarpiece depicting The Virgin with the Saints Ignatius, Francis Borgia and Aloysis Gonzaga was by Ludovico Mazzanti, he also painted the side walls in the chapel of Saint Stanislaus Kostka.
The ceiling fresco, The Glory of the Angels, is by Giuseppe Chiari.

The door leading to the Sacristy is on the right of the high altar and worth a visit to see Andrea Pozzo's altarpiece the Immaculate Conception. He was the Jesuit artist whose breathtaking ceiling can be seen in Sant'Ignazio di Loyola.
The ceiling fresco was by Jean de la Borde from 1670.

The Rooms of Stanislaus Kostka are on the first floor. The third room has a eerie black and white marble statue of the saint on his deathbed by Pierre Legros.