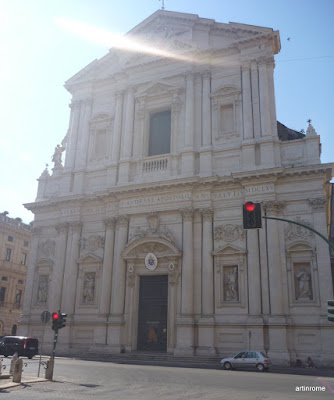 
Construction of the Baroque church of Sant'Andrea della Valle first began in 1590, it was eventually completed in 1650 after contributions from three papal families and the work of four architects.
During 1608, when the church interior was being decorated, there was fierce competition between Domenichino and Giovanni Lanfranco, two artists originally from the Carracci studio.
They were both employed to decorate the church and fought to win the prestigious commission to decorate the church dome. Giovanni Lanfranco won the commission and went on to paint the dome fresco of the Celestial Glory, completed in 1627.
At the main altar are Mattia Preti's large paintings showing Saint Andrew's Martyrdom, these paintings run across the entire apse wall. The frescoes above are by Domenichino.
In the Chapel of St Andrew Avellino are the frescoes, Death of a Saint by Lanfranco and the figures of the Evangelists in the spandrels by Domenichino.
In the Barberini Chapel is a sculpture of Saint John the Baptist by Pietro Bernini, father of Gianlorenzo Bernini.
In the Chapel Rucellai o Dei Beati the Archangel Gabriel in the Presence of the Eternal Father, Archangel Raphael and Tobias the Elder and the cupola fresco, Glory of Music Making Angels are by Cristoforo Roncalli.
In the Strozzi Chapel are the bronze copies of Michelangelo's Pieta, Leah and Rachel by Gregorio De Rossi.
In the Barberini Chapel are Passignano's Assumption altarpiece and his paintings Visitation and Lucia and St Sebastiano. 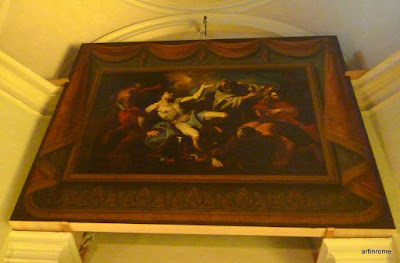 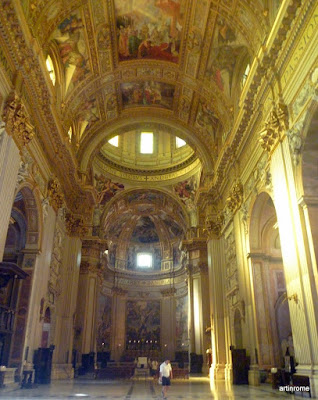