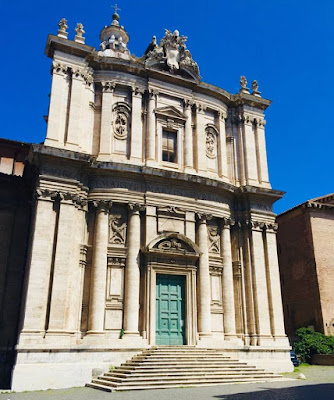 where: Via dell'Arco di Settimio/opposite San Giuseppe dei Falegnami & the Mamertine Prison
getting there: from the Campidoglio, down the stairs leading to the Forum and the Arch of Septimius Severus
open: Saturdays 8:00-20:00

The Baroque church of Santi Luca e Martina was built in the 17th century by Pietro da Cortona.
Cortona was president of the Accademia di San Luca – the academy of artists, sculptors and architects of Rome. The church was dedicated to Saint Luke, their patron saint.
The new building, on the site of a previous church dedicated to martyred saint Martina, was partly funded by Cardinal Francesco Barberini, nephew to Pope Urban VIII.
The church was then decorated by the leading artists in Rome who belonged to the Accademia.
The main altarpiece, by Antiveduto Grammatica, is a copy of Saint Luke Painting the Madonna by Raphael.
In the left transept is the Assumption and Saint Sebastian by Sebastiano Conca.
In the right transept is the Martyrdom of Saint Lazarus by Lazzaro Baldi.
In the sacristy is the relief of the Ecstasy of Saint Mary Magdalene by sculptor Alessandro Algardi.
The dome decoration inside the church is attributed to Pietro da Cortona's pupil Ciro Ferri.