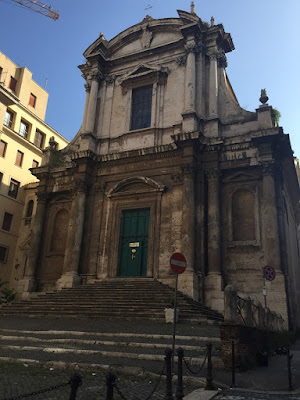 where: Salita San Nicola da Tolentino, 17
getting there: metro Linea A/Barberini or bus 85 from Termini
open: the church doesn't seem to be open very often


Not far from the Piazza Barberini is this early 17th century Baroque church dedicated to the 13th century Augustinian friar, Saint Nicholas of Tolentino.  It is also the second national church of Armenia in Rome.
The church was opened in 1624 with the interior completed with funds from Camillo Pamphilj in appreciation of his wife's recovery from an illness.
The frescoes in the dome, depicting the Apotheosis of Saint Nicholas of Tolentino were by Giovanni Coli and Filippo Gherardi.
The mid 17th century dome pendentives, the symbols of the Franciscan order, Chastity, Humility, Poverty and Obedience, were by Pietro Paolo Ubaldini.
On the right of the transept, at the altar of San Giovanni Battista, is the altarpiece of Saint John the  Baptist by Il Baciccio.
In the Chapel of Our Lady of Mercy, which is the second chapel on the left of the church, is a fresco decoration by Pietro da Cortona who also designed the chapel. The fresco was completed by Ciro Ferri after the death of Cortona in 1669.