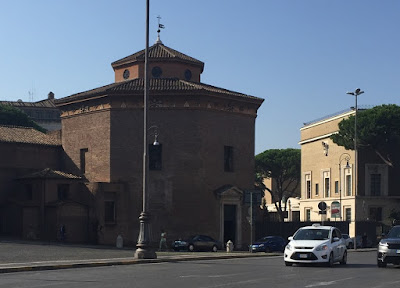 
The Lateran Baptistery (also known as San Giovanni di Fonte) is one of the oldest baptisteries in Rome and still serves as a place of baptism and prayer today. It stands alone but nearby to San Giovanni in Laterano. The entrance to the baptistery is from the Piazza di San Giovanni in Laterano.
The baptistery was originally built by Emperor Constantine in the 4th century on the site of his conversion to Christianity.
In the 17th century the baptistery was restored. The work was commissioned by Barberini Pope Urban VIII.
The interior walls were decorated with large frescoes by Baroque artists Giacinto Gimignani and Andrea Camassei with scenes from the Life of Constantine. The artists were under the direction of  Andrea Sacchi who painted the vibrant ceiling frescoes depicting the Life of Saint John the Baptist in the dome. Bees, the emblem of the Barberini family circle around the inside the dome showing that the Pope commissioned the restoration work of the church.
The two chapels on the left of the entrance contain mosaics in their apses dating from the 5th century.