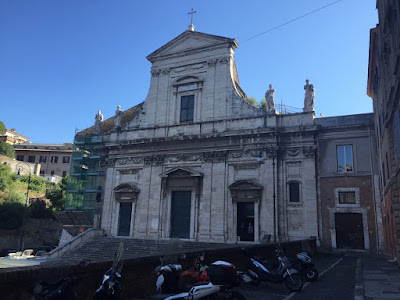 Santa Maria della Consolazione is a 16th century church below the Capitoline Hill and next to Monte Tarpeo (the Tarpeian Rock–overlooking the Roman Forum–was a place of execution where condemned criminals were thrown from the cliff in early Roman times and hanged in the Middle-ages.)
In the 14th century an imprisoned nobleman left money in his will for the commissioning of a fresco of the Virgin Mary to be placed on the wall near the site of execution.
The founding of the church began later after an innocent man who prayed to the painting was hanged but miraculously survived.
A small chapel was built around the icon of the Virgin Mary, then in the 16th century a church was built on the site and dedicated to the Blessed Virgin Mary.

Inside the church are frescoes of the Scenes of the Passion (1556) by Taddeo Zuccari in the first chapel on the right.
In the second chapel on the right is the Madonna and Child with Saints by Livio Agresti from the 16th century.
The third chapel on the right is decorated in the Baroque style and is enclosed by an intricate iron gate. The chapel was decorated by Giovanni Baglione with the altarpiece depicting the story of the Nativity.
The sacristy holds two large damaged pieces of  frescoes, one showing Christ Rising from the Tomb that date to the 15th century.
The 'original' icon that the church is named for is in the Chapel of Our Lady of Graces.
At the High Altar are two frescoes by Cristoforo Roncalli.
In the first chapel on the left church is a marble relief of the Mystic Marriage of St Catherine by Raffaello da Montelupo (c. 1530) who was a student of Michelangelo.