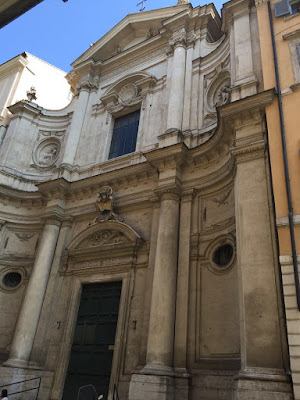 
This beautiful church on the Via Giulia is considered to be the last church of the Baroque in Rome. First built around 1526 with donations from papal friend and wealthy banker, Agostino Chigi and other nobles from Siena who were living around this area in Rome, it was dedicated to Saint Catherine of Siena, their patron saint.
In 1766 the church was rebuilt after major damage was caused by the flooding of the Tiber River.
During the 18th century the church was again rebuilt and many of the original artworks were lost. Most of the artwork in the church that we see today comes from the time of this rebuilding.