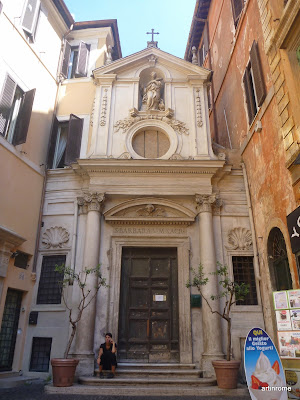 where: Largo dei Librai
getting there: near Piazza Farnese


It is thought that Santa Barbara dei Librai was built in the 10 or 11th century. It was rebuilt in the late 17th century and belonged to the guild of bookmakers and booksellers. The little Baroque church was dedicated to Saint Barbara, the martyred virgin from the third century.
In the late 19th century the church was deconsecrated and used as a warehouse. It was finally rescued and restored in the nineteen-eighties, reconsecrated and again used as a church and venue for music concerts.
The interior walls are cleverly decorated with imitation marble. Above, on the vault ceiling, is the Apotheosis of Saint Barbara by Luigi Garzi, who also decorated the Chapel of the Crucifix and the transept walls with frescoes.
Other works date from the 19th century restoration by Domenico Monacelli who was commissioned to complete the frescoes in the transept and apse and retouch the ceiling by Garzi.
Of interest is the painting of Saint Saba in the Specchi Chapel on the left by Giovanni Battista Brughi, pupil of il Baciccio.