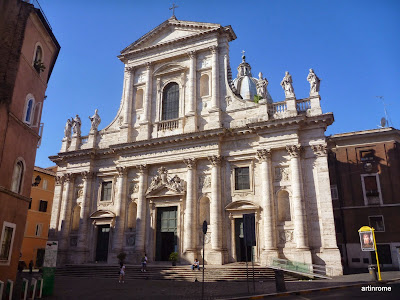 The building of the Baroque church of San Giovanni dei Fiorentini first began in 1519 when Medici pope, Leo X, asked for a new church to be built on the site of one dedicated to Saint John the Baptist, the protector of Florence. Construction stopped and started many times until it was finally completed in 1734.
Inside the church at the main altar are the white marble sculptures of the Baptism of Christ (1668) by Antonio Raggi, with above, Faith by Ercole Ferrata and Charity by Domenico Giudi, at the top are statues of Justice by Michel Anguier and Strength by Leonardo Retti.
In the first chapel on the right is an altar painting attributed to Passignano from 1639, another of his works, Saint Jerome Supervising the Building of a Monastery dates from 1599 and can be found in the third chapel on the right.
In the Chapel of the Virgin there is an altarpiece attributed to Filippino Lippi of the Virgin and Child.
The Sacchetti Chapel, entirely decorated by Giovanni Lanfranco from 1621 to 1623, depicts on the right wall the Prayer of Jesus in the Garden, the left wall Christ on Calvary and Christ in Glory on the ceiling.
In the Firenzuola Chapel there are side frescoes attributed to Orazio Gentileschi.