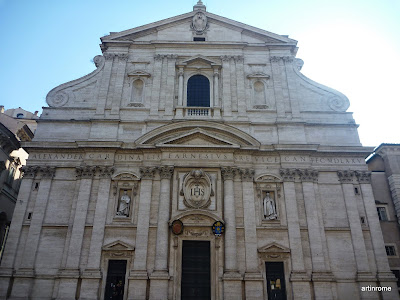 
Not far from Piazza Venezia is the 16th century Chiesa del Gesù, the mother church of the Jesuits.
It is said to be one of the first churches to introduce the Baroque style into architecture and art and has served as a model for Jesuit churches all over the world.
Although the church's interior was designed originally to be plain and unadorned, in the 17th century patrons of the church commissioned many artists to add to the decorations inside the church to indicate their wealth and status.
Today the church is visited for its beautiful, illusionistic ceiling fresco by the Baroque artist il Baciccio, a large mirror on the floor allows you to look at the ceiling to see the detail without straining your neck.

The church also holds Bernini's bust of Cardinal Robert Bellarmine from 1623 in the right of the sacristy.

The altarpiece at the high altar is a Circumcision by Alessandro Capalti from the 19th century.

The third chapel on the right is decorated with ceiling, wall frescoes and the altarpiece of the Archangel Michael and the Angels by Federico Zuccari.

On the left side of the nave, opposite the chapel to Saint Francis Xavier is the Cappella di Sant' Ignazio. It holds the marble and bronze tomb of Ignatius Loyola, founder of the Jesuits. It was designed by Andrea Pozzo, who was also responsible for most of the decorations and the fantastic ceiling fresco in the church of Sant'Ignazio da Loyola.

The third chapel on the left is the Cappella della SS Trinità decorated by Durante Alberti with the altarpiece by Francesco Bassano the Younger of the The Most Holy Trinity. 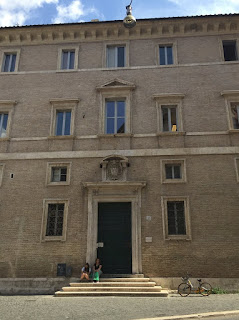 Also worthy of a visit are the Rooms of Saint Ignatius. Built in 1543 for the saint and creator of the Society of Jesus, these original rooms were where the saint lived for the twelve years before his death.
The entrance corridor is richly decorated with frecoes by il Borgognone (Guilliame Courtois), and not to be missed is the stunning illusionistic fresco by Andrea Pozzo.
Entry to the rooms is located on the outside of the church – follow the signs. Entry is free but donations are accepted.
entrance: on the front facade of the church
cost: free/donation welcome
open: Monday to Saturday 16:00-18:00 and Sunday 10:00-12:00 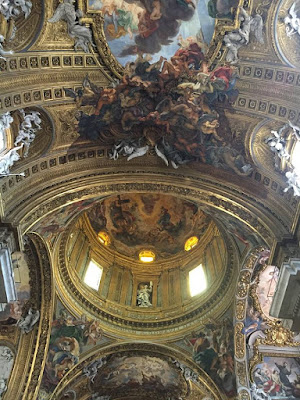 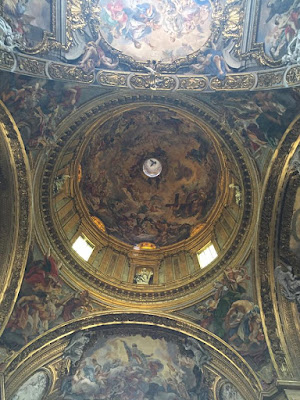 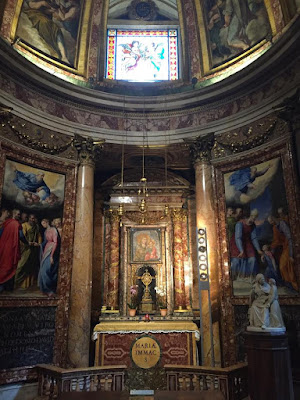 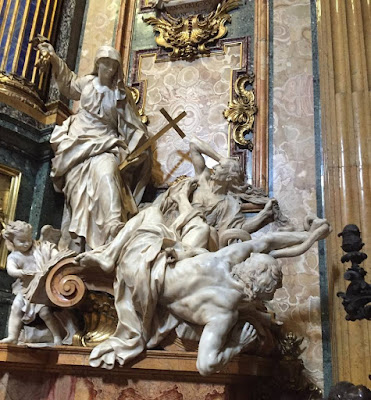