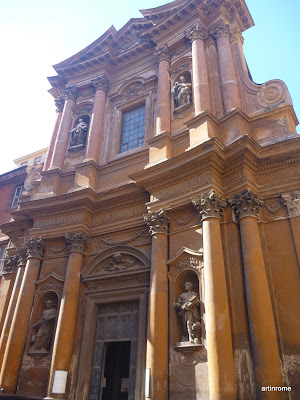 Santissima Trinità dei Pellegrini was built in the early 17th century on the site of a small parish church. It was named Most Holy Trinity of Pilgrims and dedicated to those who travelled to Rome.
This quite, ochre coloured church is located in a small piazza not far from the Palazzo Spada and the Via Giulia.
The architect was Martino Longhi the Elder and building began in 1587 but it wasn't until 1723 that the Baroque facade was completed by Francesco de Santis, the architect who designed the Spanish Steps.
Bernardino Ludovisi created the statues of the Evangelists for the niches in the facade.
inside:
The church has three chapels either side of the nave.
The high altarpiece of  the Holy Trinity (1625) is by Guido Reni.
In the second chapel on the right is Filippo Bigioli di Sanseverino's Vision of Our Lady to Saint Philip.
In the first chapel on the left is an altarpiece by il Borgognone (1677) of the Madonna and Child with Saints.
In the second chapel, left side is the Virgin and Saints by Cavaliere d'Arpino.
The third chapel on the left, decorated with frescoes also holds the altarpiece Saint Gregory Freeing the Souls from Purgatory by Baldassare Croce.