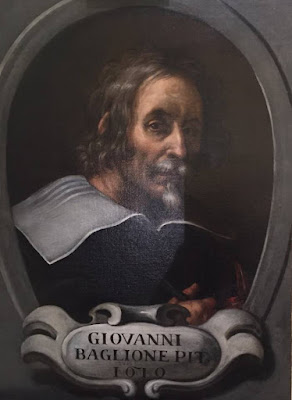 Giovanni Baglione was a Baroque painter. He was born in Rome and spent most of his working life there. During his long career he was employed by popes Sixtus V, Clement VIII, Urban VIII and Paul V. as well as the many private commissions he received.
Giovanni Baglione and Caravaggio, although contemporaries, had a mutual dislike of each other which resulted in a court case where Caravaggio was sued for slander after he and his artist friends circulated unflattering poems, causing Caravaggio to spent two weeks in prison.
Baglione's painting, Profane Love Subdued by Divine Love which caused all the trouble is in the Galleria Barberini.
Baglione published two books, 'Vita de Pittori' on the lives of painters, sculptors, architects and engravers and 'The Nine Churches of Rome'.
He was a member of The Accademia san Luca and died in Rome at the age of 77.