Francesco Albani was born in Bologna in 1578. His father was a silk merchant but instead of joining his father's business he became an apprentice at age 12 to Flemish painter Denis Calvaert. In this studio he met fellow student Guido Reni, following him to the Academy run by the Carracci family and becoming one of Annibale's prominent apprentices.
In 1601 Reni and Albani moved to Rome to work on the frescoes in Palazzo Farnese with Annibale Carracci and his studio, also with Annibale's designs and the assistance of Lanfranco he completed frescoes in the San Diego Chapel in what was then San Giacomo degli Spagnoli in Piazza Navona, now called Nostra Signora del Sacro Cuore. Much of the artwork here was destroyed or removed during the early 19th century.
He worked independently from the Carracci studio in the early 17th century completing the choir frescoes in Santa Maria della Pace and frescoes of San Sebastian and the Assumption of the Virgin in San Sebastiano Fuori le Mura.
He returned to work in Bologna after the death of his first wife where he remarried and remained there until his own death in 1660.
His pupils included his brother Giovanni Battista Albani and Andrea Sacchi. 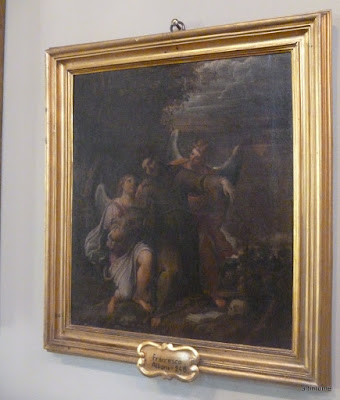