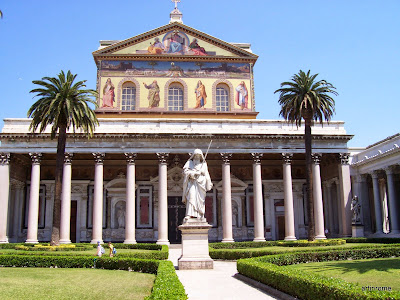 The Basilica of San Paolo Fuori le Mura is outside the walls of Rome and the name literally translates to Saint Paul Outside the Walls. Here is thought to be the final resting place of the Apostle Paul after his execution.
The original church was built by Constantine in the 4th century, over the centuries the church was enlarged until a fire in 1832 almost completely destroyed it. The church was rebuilt to the same plan and style and reopened in 1840.
Inside is a 12th century candlestick that survived the fire. Reaching five meters high it is decorated with scenes of Christ's Passion, Death and Resurrection. The tabernacle dating from the 13th century, as well as the triumphal arch and original mosaics also survived.
Circling the top of the walls of the Basilica are mosaics of all popes from Saint Peter to the current pope, with still room for a few more portraits.
The statue of St Paul in the atrium garden in front of the church is by Giuseppe Obici and dates from the 19th century.