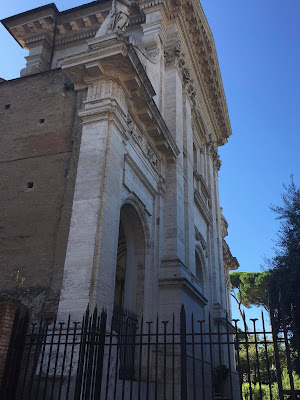 where: Piazza di Santa Francesca Romana, 4
getting there: walk up Clivo di Venere Felice near the Colosseum
open: 10:00–12:00 & 16:00–18:00
Santa Francesca Romana is a minor Basilica on the corner of the Forum near the Colosseum.
The church, originally an oratory, occupies part of the Temple of Venus and Rome, an ancient temple that was built in the Roman Forum.
In the 17th century the church was remodeled in the Baroque style and a new facade was added and the church was dedicated to the Virgin Mary and Saint Frances of Rome.
In the Sanctuary apse is a mosaic that dates to around 1160 depicting the Madonna and Child with saints John, James, Peter and Andrew.
The high altar altarpiece frescoes depicting the Catacomb Martyrs are by Domenico Maria Canuti and date to 1684.
On each side of the main altar are two angel from the school of Bernini.
Under the altar are the skeletal remains of Saint Frances dressed in her habit.
Pope Gregory XI, the pope who bought the papacy back from Avignon, is buried here.
Posted by Gina at 8:21 PM