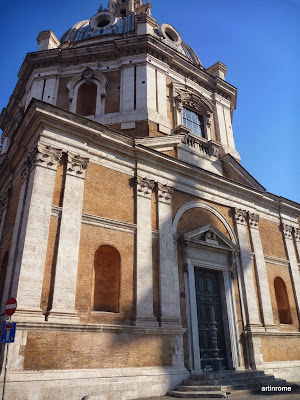 A short walk from the imposing Vittorio Emanuele II monument and to Trajan's column, and next-door to Chiesa Nome di Maria, is the 16th century church of Santa Maria di Loreto.

In the Jubilee Year of 1500 Borgia Pope Alexander VI gave his permission for a church to be built on the site of an existing chapel dedicated to the Virgin of Loreto for the guild of the bakers.
The church was designed by Antonio da Sangallo, the younger and construction started in 1507 –although the church was not fully completed until the later part of the 16th century by Jacopo del Duca.

The church has some wonderful sculptures representing the Virgin and the martyrdom of four Roman saints.
The Virgin and Child and the Blessed House of Loreto at the front door by Andrea Sansovino, and the four saints at the main altar, carved by Stefano Maderno, Giuliano Finelli, and Francois Duquesnoy.

The 15th century altarpiece, Madonna with Saint Sebastian and Saint Roch, is attributed to Antoniazzo Romano.

The side walls of the main altar, decorated with the Scenes of the Blessed Virgin Mary (1630) are by Giuseppe Cesari, Cavaliere d'Arpino.

Mosaics in the first chapel on the right are by Paolo Rossetti and date from 1594.
The second chapel decorations are by Niccolò Circignani, il Pomarancio. 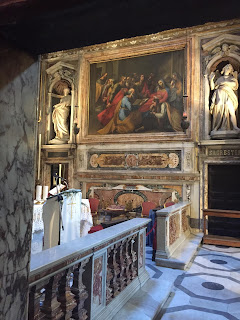