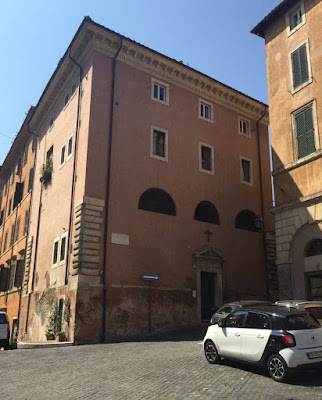 where: Piazza Cinque Scole, 3
getting there: bus 40 or 64/stop Argentina, then a short walk toward the Jewish Ghetto
open: weekdays 10:00-12:00
information: the facade of the church is in a little piazza in Via Monte de Cenci, but the actual entrance to the church is via the doorway in Piazza Cinque Scole (pictured)
The small church of San Tommaso ai Cenci was built in the 16th century.
It is surrounded by the properties and palaces once owned by the family of Beatrice Cenci and was the Cenci family chapel.
The church has many symbols of the Cenci family crests incorporated into the decorations. The nave ceiling fresco painted with crescent moons, the Cenci family crest, and the first chapel on the left, commissioned by Ludovica Velli, widow of Giacomo Cenci has heraldry of both the Velli family crests, the tree and the Cenci crescent.
The Baroque chapel on the right is also similarly decorated with heraldry of the family.
There is a counter facade lunette fresco depicting Christ and the Samaritan Woman dating to the 17th century which was rediscovered during a 1972 restoration of the church.
At the high altar is a painting of Our Lady of Sorrows  from the 17th century.
In the second chapel on the left is a fresco by Girolamo Sicolante de Sermoneta dating to 1565.
Posted by Gina at 6:57 PM