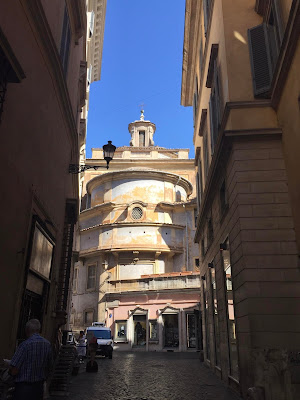 where: Piazza Campo Marzio
getting there: short walk from the Pantheon along Via Maddalena to Piazza Campo Marzio
open: mass on Monday, Wednesday and Friday at 8:00
entrance: entry to the church is through the convent doorway in Piazza Campo Marzio, into a long portico, the church entrance is on the right.
A church and monastery has been on this site since the 8th century.
In 1563 Chiarina Colonna a member of the powerful Colonna family, who was Abbess of the adjoining Benedictine convent, commissioned the building of Santa Maria in Campo Marzo.
In the 17th century the monastery was enlarged and it was during this time that the church was completely rebuilt.
During the French occupation of Rome the church was used as an office and the nuns expelled.
From 1920 the church has been the national church of Syria.
In the apse are three frescoes depicting Our Lady Immaculate with Angels by Placido Costanzi (1730), surrounded by gilded stucco. The icon at the high altar is of Our Lady, the Madonna Advocata and dates to the 13th century.
In the first altar on the right is the Deposition by Baroque artist, Baccio Ciarpi.
In the third altar is an altarpiece depicting Saint Gregory by Luigi Garzi.
The second altar on the left was decorated by Lazzaro Baldi.