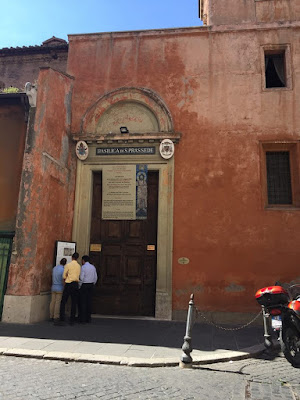 where: Via di Santa Prassede, Esquilino
getting there: 10 minute walk from the Termini train station in the direction of Santa Maria Maggiore
open: 7:00-12:00 & 15:00-18:30
information: entrance into the church is on Via di Santi Prassede through an unassuming doorway, a view of the original entrance to the church can be found around the corner on Via San Martino ai Monti


The ancient church of Santa Prassede was first commissioned by Pope Adrian I in the 8th century to hold the remains of two saints, martyred sisters Praxedes and Pudentiana.
The church was enlarged by Pope Pascal I in around 822 and decorated with the stunning mosaics in the apse and arch at the high altar, and the nearby Saint Zeno Chapel.
Over the centuries the church has been remodeled and renovated many times, but thankfully these beautiful mosaics at the main altar and funerary chapel – that the church is visited for today – were never touched.

inside:
The 9th century main altar and arch mosaics in the Byzantine style show The Second Coming of Christ. The Zeno Chapel (which was also decorated at this time) glisten with floor to ceiling golden mosaics.
The large canvas altarpiece, Saint Praxedes Gathering the Blood of the Martyrs, was by Domenico Muretori and dates to 1730.
In the 16th century Cardinal Alessandro de' Medici (future Pope Leo XI) commissioned leading artists of the day – Paris Nogari, Giovanni Balducci, Agostino Ciampelli and Baldassare Croce to fresco a cycle of paintings on the counter-facade and around the nave ceiling and pillars.
The Medici coat-of-arms, held by two angels, is included in the design of the counter-facade fresco.
In the Chapel of Saint Pius X are paintings by il Borgognone (Gugielmo Cortese) and side wall lunnettes were by Ciro Ferri.
In the Olgiati Chapel the vault frescoes were by Giuseppe Cesari and the altarpiece by Federico Zuccari.

Also housed in the church is the alleged pillar from the flogging of Jesus before the Crucifixion, bought to Rome by Saint Helena in the 4th century and the funerary monument of Giovanni Battista Santoni a bust by Bernini, one of his earliest commissions.