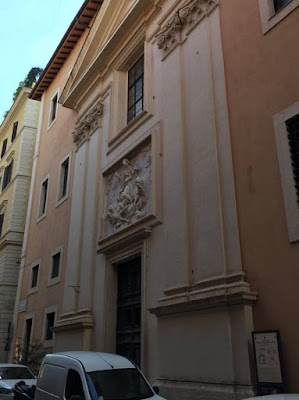 
I came across Santa Maria dell'Umilità and noticed the stunning marble relief on the facade and I was curious to look inside, sadly the church isn't open to the public.

A convent and church was first built here in the early 17th century.
Francesca Baglioni Orsini (niece to Pope Clement VII, and daughter of Caterina de Medici) was married into the wealthy Orsini family. In 1601 she founded a convent for noblewoman who had fallen on hard times, the church was dedicated to the Assumption of the Virgin Mary.
In 1625 when Francesca Orsini died she willed a large amount of money to the church. It became one of the richest and most fashionable nunneries in Rome catering to nuns from noble families.

In 1641 a new church was built and in 1681 work was started on the interior.
In 1726 Michelangelo Cerruti painted the ceiling fresco, Assumption of Our Lady.
The church interior is apparently richly decorated with marbles, gilt stucco, paintings and six statues by Antonio Raggi of martyred saints Cecilia, Catherine, Barbara, Agatha, Ursula and Agnes.