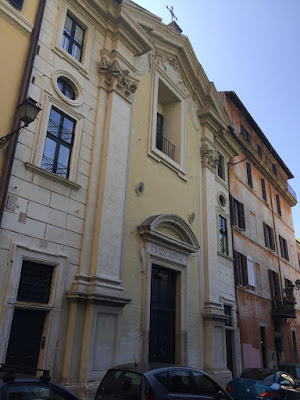 Santi Giovanni e Petronio dei Bolognesi is a small church from the 16th century. It is situated in the ivy-covered street on Via del Mascherone that leads from Via Giulia and down towards Piazza Farnese.
The church is dedicated to Saint John the Evangelist and Saint Petronius, the 5th century bishop and patron saint of Bologna.
The church was built in 1581 and belonged to the confraternity of Bologna. Most of the artists whose work was commissioned for the church were also citizens of Bologna who were working in Rome.
The church once held the large altarpiece of the Mother and Child with Saints Giovanni e Petronius by Domenichino which was commissioned for the church in 1625, but during the French occupation of Rome many artworks and altarpieces were taken from the church. In 1953 the painting was returned to Rome and is now in the Galleria Barberini.
Inside the church are the pendentive frescoes and dome by Pompeo Aldrovandini and an altarpiece in the chapel of Saint John depicting the death of Saint Joseph by Francesco Gessi.
The copy of Domenichino's altarpiece in the sacristy is by an unknown artist.
The church was deconsecrated in 1810 and turned into a warehouse but later restored as a church again in 1873.