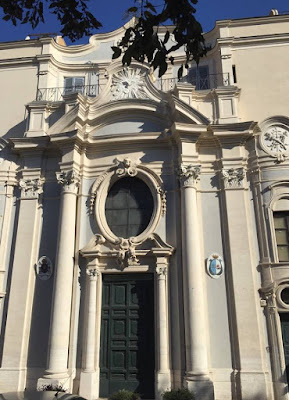 
Santa Maria Annunziata in Borgo (or Nunziatina as it is known) is a church that was rebuilt after the Via della Conciliazione was made in 1940. The church was once joined to the nearby Ospedale di Santo Spirito in Sassia (Hospital of the Holy Spirit) but had to be demolished to make way for the new road.
The church has a single nave and is quite plain inside.
The main altarpiece, the Annunciation, is by Baroque painter Angelo Massarotti. He also painted the other pieces around the walls, the Deposition, Dormition of Our Lady, Birth of Our Lady and the Nativity.

The nave ceiling fresco of the Triumph of the Cross is very recent (20th century). Angelo Urbani del Fabbretto reproduced the Baroque fresco lost in the demolition of the church.
The church is also the home to art from another church, Sant'Angelo in Borgo, also demolished during the roadwork.
The fresco work of the Virgin of the Milk with Child is attributed to Antoniazzo Romano, and the lunette fresco, the Apparition of the Archangel Michael to Pope Gregory the Great is by Giovanni Battista Montano.