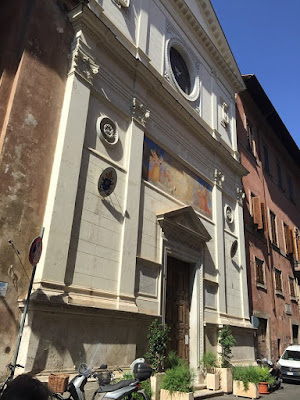 
On Via Giulia, near the Arco Farnese, is Santo Spirito Napoletani. The church was built in the 16th century but heavily restored in the early 19th century.
The church seems to be only open on Sundays between 9am and 1pm, but if you have the chance to see inside you will find one of the last works of Luca Giordano in Rome that is said to date from 1705 depicting the Martyrdom of San Gennaro, the patron saint of Naples.
The dome painting is by Giuseppe Passeri and there is an altarpiece by Giuseppe Ghezzi and fresco by Antoniozzo Romano.
Above the door on the facade is a fresco from 18th century by Pietro Gagliardi depicting the Holy Spirit in Glory.
Posted by Gina at 8:32 PM