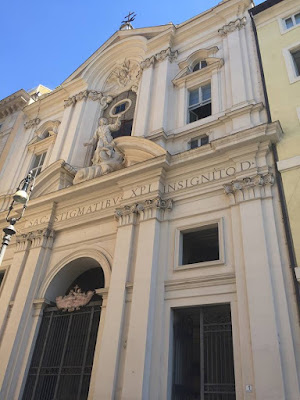 where: Via dei Cestari, Pigna
getting there: near the Corso Vittorio Emanuele II and Via dei Cistari/ bus 64 stop Argentina
open: 7:00-12:00 & 16:30-19:00
information: It's not advisable to wander the church while mass is being performed, so check for mass times before entering the church


The Baroque church of the Holy Stigmata of Saint Francis was built in 1714 on the site of a previous medieval church.
The new building belonged to the Confraternity of the Stigmata of Saint Francis, a brotherhood who cared for the poor and sick – above the portico on the facade is a statue by Antonio Raggi of Saint Francis receiving the Stigmata.
inside:
The church has a single nave with three chapels on either side.
The fresco on the barrel-vault ceiling, the Glory of St Francis, is by Luigi Garzi.
The main altarpiece of Saint Francis with Stigmata by Francesco Trevisani dates from 1719.
The first chapel on the right was dedicated to the Passion of Christ. On the right wall is the Flagellation by Marco Benefial, on the left wall is a painting by Domenico Maria Muratori of the Crowning with Thorns. Giovanni Odazzi painted the cupola fresco Triumph of the Cross.
The second chapel on the right was dedicated to Saint Michael the Archangel. The altarpiece is a copy of Guido Reni's Saint Michael from the church of Santa Maria della Concezione dei Cappuccini and is thought to be by Marco Capriozzi who also painted the altarpiece in the next chapel.
There is another altarpiece by Francesco Trevisani in the third chapel on the left showing Saint Francis Having a Vision of the Christ-Child.
In the first chapel on the left is an altarpiece by Giacinto Brandi. 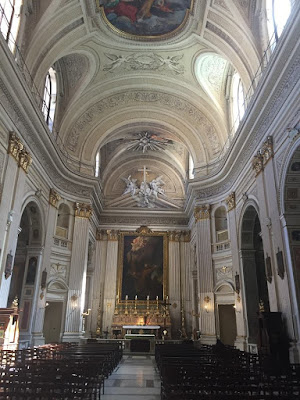