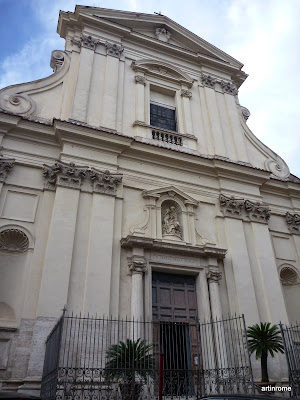 
Santa Maria della Scala is a Baroque church in the Piazza della Scala in the Trastervere neighbourhood.
It was built for the Order of the Discalced Carmelites between 1593 and 1610 to house an icon of the Virgin Mary that was claimed to have healed a crippled child from the area.
In 1601 the fraternity commissioned Caravaggio to paint the Death of the Virgin for the church. The canvas was completed in 1605 but the monks refused to take possession of the painting as they thought it was not a respectful depiction of the Virgin Mary's death.
Caravaggio used many local people from the streets of Rome in his paintings and it is thought that he used the body of a dead prostitute found floating in the Tiber as his model for this canvas.
Caravaggio's Death of the Virgin is now in the Louvre Paris.
Baroque artist Carlo Saraceni, who worked mainly in Rome, was then contracted to paint a second version of the Death of the Virgin which is still in situ in the second chapel on the left.
Other paintings of interest in the church are the choir apse fresco, the Queen of Heaven, by Giuseppe Cesari (Cavaliere d'Arpino), the altarpiece by Dutch painter Gerrit Van Honthurst depicting John the Baptist –first chapel on the right, Our Lady with Saints Catherine of Siena and Hyacinth again on the right in the second chapel and the Holy Family (1710) by Giuseppe Ghezzi in the third chapel.
In the first chapel on the left are an altarpiece of The Virgin and a fresco of The Eternal Father by Cristoforo Roncalli. 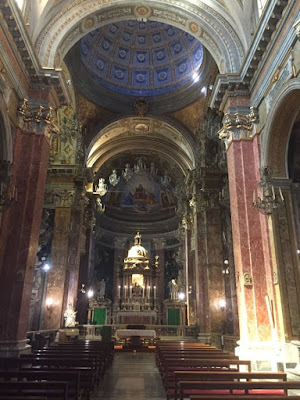