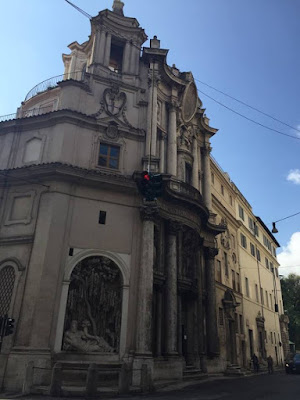 San Carlo alle Quattro Fontane is a church near the four late-Renaissance fountains at the crossing of  Via della Quattro Fontane and Via del Quirinale.
The Baroque church was designed by Francesco Borromini in 1634 was and one of his first solo commissions funded by Cardinal Francesco Barberini who lived in the nearby palace.

The church, visited by people mainly interested in the architecture by Borromini, also has some interesting altarpieces.
In the small first chapel of the Crucifixion, on the right of the entrance, are three painting by Giuseppe Milanese from 1653.
The next chapel on the right holds a canvas dating from 1847 by the Florentine female artist, Amalia de Angelis.
The main altarpiece is from the 17th century by French painter Pierre Mignard, it shows Saint Charles Borromeo and Saints.
At the left altar is the Ecstasy of Saint John the Baptist by Prospero Mallerini from 1819.


Two notable paintings that were once in the sacristy are the giant canvases of Saint Ursula, and the Holy Family with Saints Agnes and Catherine of Alexandria that hang in the corridor leading to the cloisters.
To find these enter through the doorway at the right of the main altar and head towards the signs leading to the crypt.
The paintings, by Giovanni Domenico Cerrini, are beautiful and it is a shame that they seem so hidden away. 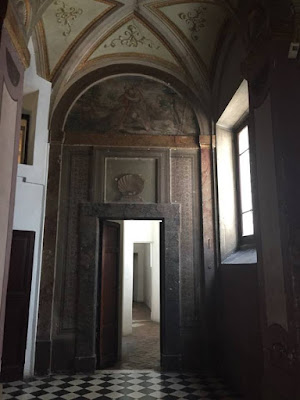