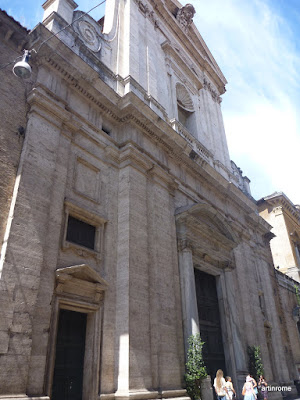 
This Baroque church is on the Via del Corso, not far from Piazza del Popolo and almost opposite the church of Gesù e Maria.
It was originally built in the 14th century as a small chapel connected to a hospital for pilgrims and commissioned by two cardinals from the Colonna family.
In the 16th century Cardinal Antonio Maria Salviati commissioned the redesign and enlargement of the church – on the facade is the shield of the Salviati family crest, the scallop shell above is the symbol of Saint James the Great, the church's patron saint.
By 1515 Pope Leo X had given the hospital over to the treatment of patients with syphilis, it was then known as San Giocomo degli Incurabili as at that time the disease could not be treated.
The church was sacked in the anti-clerical riots of 1849 and for some time it was used as a stable, then in 1863 Pope Pius IX commissioned the restoration of the church and interior.
The main ceiling fresco, the Glory of Saint James is by Silverio Capparoni, it was his first major commission and completed in 1863.
The main altar was designed by Carlo Maderno, the altarpiece canvas by Francesco Grandi, dates from the following year.
The first room on the right was originally the baptistery and has a canvas of the Resurrection of Christ from between 1601 and 1603, by Cristoforo Roncalli.
In the third chapel on the right is the Baptism of Jesus by Passignano dating from 1600 and on the left wall is a canvas of the Virgin and St James and Vittoria Tolfia by Francesco Zucchi from 1610.
In the chapel of the Madonna of the Rosary is the Adoration of the Shepherds by Antiveduto Gramatica from 1623.
The marble columns were supposedly taken from the nearby Tomb of Augustus.