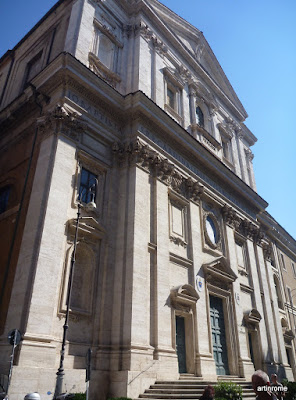 
Near the tree filled Piazza Benedetto Cairoli and the tram station on Via Arenula, is the 17th century Baroque church of San Carlo ai Catinari, dedicated to saints Charles Borromeo and Blaise.
The church takes its named from the street on which it was built, the location of the stalls of the catinari — wooden dish makers.

When I visited the church in 2013 it was under heavy restoration with the nave ceiling and many of the chapels covered with scaffolding and sheets of protective plastic, but I was lucky enough to be taken through a doorway into the sacristy and choir by one of the clergy in the church who proudly showed me the painting by Giuseppe Cesari of the Mocking of Christ from 1640, the fresco of Saint Charles by Guido Reni and the Miracle of Saint Blaise by Giovanni Domenico Cerrini.

So many artists contributed to the decoration of the church.
The cupola fresco and the pendentives of the four cardinal virtues, Justice, Prudence, Temperance and Fortitude date from 1627, created by Domenichino.

On the wall, at the entrance are the frescoes, Charity of St Charles by Mattia Preti and Charles Borromeo Fighting Against Heresy by his brother, Gregorio Preti from 1642.

The church has one of Giovanni Lanfranco's last works, the fresco of San Carlo Borromeo in Glory, completed between 1646 and 1647. Also in the first chapel on the right is his altarpiece of the Annunciation from 1624.

At the high altar, a painting of St Carlo Carrying the Holy Nail in Procession during the Plague, is by Pietro da Cortona from 1667.