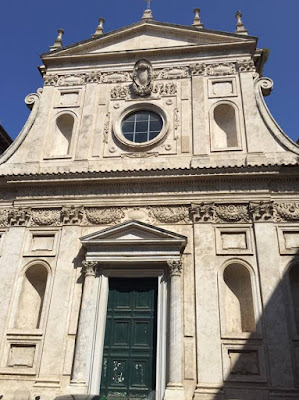 where: Via dei Funari

getting there: short walk from Via Arenula, near the Fontana delle Tartarughe (Turtle Fountain)
open: possibly only open on Sunday for mass

Santa Caterina dei Funari is a 16th century church not far from the late Renaissance Fontana delle Tartarughe (the Fountain of the Turtles) in Piazza Mattei.
The church takes its name from the funari – rope/string-makers, who were located around this area during Medieval times.
The church was dedicated to Saint Catherine of Alexandria and the wheel, a symbol of her martyrdom, can be found carved above the facade door.
Inside, in the Cappella Bomasi, is the large altarpiece of Saint Margaret painted in 1600 by Annibale Carracci. He also painted the altarpiece of Santa Barbara in the first chapel on the right.
In the second chapel on the right is the Deposition by Girolamo Muziano.
In the Cappella Cesi are the Scenes of the Life of Saint Catherine painted by Federico Zuccari in 1572.