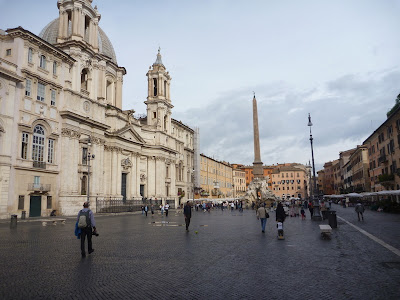 The oval square was created in the 15th century, built on the site of the Stadium of Domitian from the 1st century AD.
In the center, in front of the church of Sant'Agnese in Agone by Borromini, is the Fontana dei Quattro Fiumi (Fountain of the Four Rivers) commissioned by Pope Innocent X, designed by Gianlorenzo Bernini and completed in 1651.
The four figures represent the rivers Nile, Ganges, Danube and Rio della Plato. 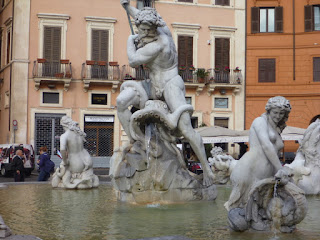 Piazza del Popolo (People's Square) is a large oval square that holds three churches and once was a place for public executions until the 19th century.
Inside the Porta del Popolo, in the Aurelian Wall, is the Renaissance church of Santa Maria del Popolo.
At either side of the entrance to Via del Corso, which runs through the heart of Rome, is Santa Maria dei Miracoli and Santa Maria in Montesanto.
The square was redesigned in the 16th century with stairs to the Pincian Hill of ancient Rome and the Villa Borghese gardens.
In the centre of the square is a fountain, designed around an Egyptian obelisk of Rameses II, brought to Rome in 10 b.c. for The Circus Maximus and moved to the piazza in the 16th century on the request of Pope Sixtus V.