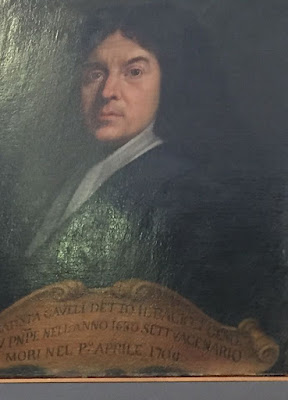 Il Baciccio 1639 - 1709
Giovanni Battista Gaulli was a Baroque artist who was born in Genoa (Baciccio is the Genoese nickname for Giovanni Battista). He went to Rome around 1658 and his first known commission was the altarpiece in the church of Sant'Rocco in 1663. In 1666 he received a commission from the Pamphilj family to paint the pendentives in Sant'Agnese in Agone, then in 1672 he was awarded the commission to decorate the ceiling in the Jesuit church of Il Gesù, with a contract to complete the works in the church over 10 years. It is this work of his stunning vault ceiling fresco, the Triumph of the Name of Jesus that the name il Baciccio is mostly recognised.
In 1707, two years before his death, he again worked on a ceiling fresco depicting the Triumph of the Franciscan Order, this time for Santi XII Apostoli.
During his lifetime he also painted the portraits of seven popes, Alexander VII, Clement IX, Clement X, Innocent XI, Alexander VIII, Innocent XII and Clement XI.

click here for il Baciccio - a walking tour
Posted by Gina at 10:57 PM