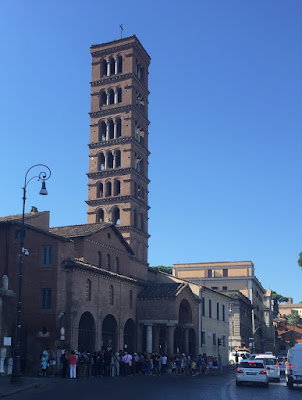 
Most visitors come to Santa Maria in Cosmedin not to visit the ancient church, but instead to line-up and see the Mouth of Truth (Bocca della Verità) a large, round marble face with the gaping mouth made famous in the 1953 movie Roman Holiday starring Audrey Hepburn and Gregory Peck.
Legend surrounding the Bocca della Verità is that your hand will be bitten off if you tell a lie after placing it in the statue's mouth, but actually the marble disc is thought to have once been an ancient drain cover or man-hole from the area.
Long queues begin to appear quite early in the morning to visit the Mouth of Truth, but if it is just the church you wish to see walk to the right of the portico and enter the church. 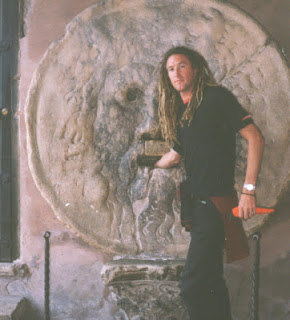 The origins of Santa Maria in Cosmedin can be traced back to the early 6th century where a church was built on the ruins of a temple to Hercules which is still visible in the crypt.
The basilica which can be seen today was enlarged in the 8th century by Pope Hadrian I and has undergone may restorations over the years including a Baroque makeover 1718. This makeover was later removed and the church was restored to the perception of  Medieval appearance.
In the sacristy are fragments of mosaics saved from the original Saint Peters and moved to the church in 1639.
The second chapel on the left of the church is dedicated to Saint Valentine and his head is in a reliquary below a large altarpiece of the saint. Every year on Saint Valentine's Day the head is covered with red roses. 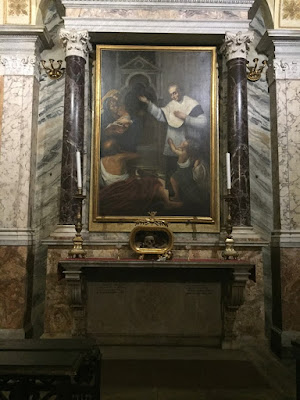 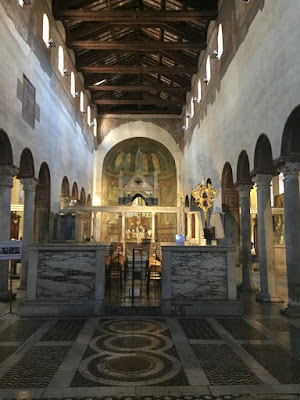 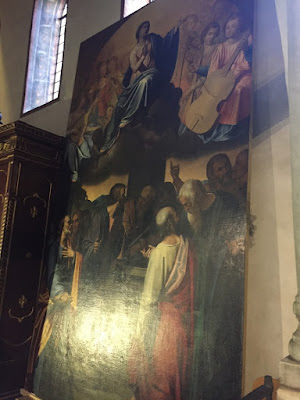