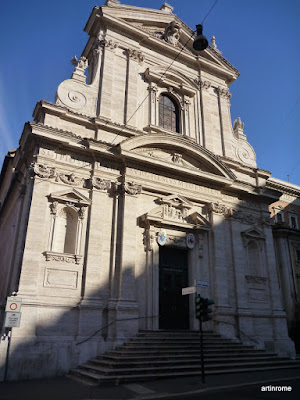 where: Via XX Settembre, 17
getting there: metro linea A/Repubblica or bus 85 from Termini

I was really interested in visiting the Baroque church of Santa Maria della Vittoria for the sculpture by GianLorenzo Bernini of The Ecstasy of Saint Teresa and found so much more inside than just his famous creation.
The church was built in the early 17th century and the interior was designed by Carlo Maderno. It was paid for mainly with funds from Cardinal Scipione Borghese, Bernini's patron.
The beautiful vault ceiling was created by brothers Giuseppe and Andrea Orazi depicting the Triumph of Our Lady over the Heresies and the cupola was decorated by Giovanni Domenico Cerrini and shows the Ascent of St Paul into Heaven. In the dome of the high altar is the 19th century painting by Luigi Serra, it dates from the time when the altar was rebuilt after a destructive fire.
The Cornaro Chapel is the fourth chapel on the left and what the church is mostly visited for.
Gianlorenzo Bernini designed the chapel in 1646 for Cardinal Cornaro and inside is his white marble sculpture of the Ecstasy of St Teresa which depicts Saint Terese and her vision of an angel who appeared and pierced her with a golden spear, leaving her in a rapture of religious ecstasy.
In the third chapel on the left is Guercino's The Most Holy Trinity and Guido Reni's portrait of Cardinal Berlingèro Gessi.
The second chapel altarpiece is Jesus Appearing to the Saints by Nicholas Lorrain, he also painted the two canvases on the chapel's side walls.
On the side walls of the first chapel on the left are two portraits by Giuseppe Cesari. The altarpiece is by an unknown artist and depicts the martyrdom of the Apostle Saint Andrew.
On the right, in the second chapel dedicated to Saint Francis of Assisi, is The Virgin and St Francis by Domenichino, he also decorated the chapel with frescoes on the side walls.

The church is open from 8am until noon and a guide book on the church can be bought from the sacristy. 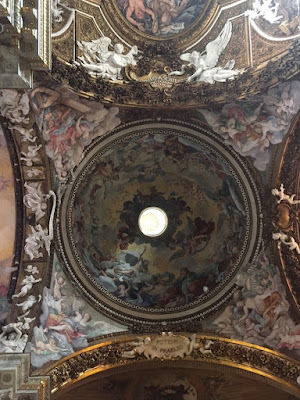