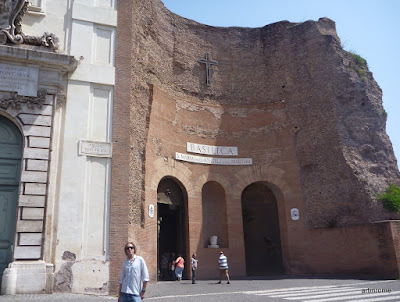 where: Piazza della Repubblica
getting there: metro linea A/Repubblica

This unique Renaissance church, not far from Termini, was designed by Michelangelo and built inside part of the ancient Baths of Diocletian from the 4th century BC.
The church is dedicated to the Virgin Mary and the Angels, and to the Christian slaves who died during the building of the baths.
Inside the church are eight large paintings that originally were hanging in Saint Peter's, placed here in the 18th century to preserve them from ruin from candle and incense smoke.
In the presbytery are Domenichino's Martyrdom of St Sebastian, Cristoforo Roncalli's Death of Anania and Safira (1604) and Carlo Maratta's Baptism of Jesus.
The Chapel of San Giacinto was decorated with frescoes by Giovanni Baglione and it holds his altarpiece portraying the Virgin and Child with Angels and Saints Raimondo and Giacinto.
In the transept, on the right, is the painting by Girolamo Muziano of the Sermon of Saint Girolamo and in the right chapel, on opposite walls, are Francesco Trevisani's Baptism of Desire, and Baptism of Water, also by him on the left hand side, in the Chapel of San Bruno, is the Baptism of Blood, and his final work, in the passageway to the transept, an oval painting, the Expulsion from Earthly Paradise.
On the left of the transept, above the sacristy is Pietro Bianchi's painting of The Immaculate.