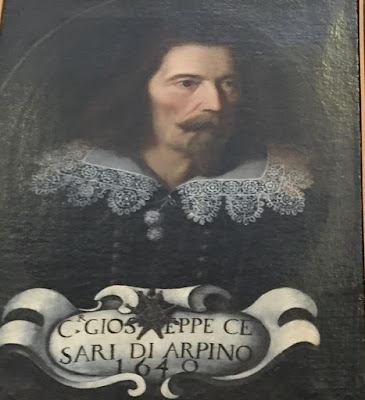 Giuseppe Cesari was the son of a painter, born in Arpino in the kingdom of Naples in 1568.
He went to Rome around 1582 and was apprenticed to Niccolò Circignani (il Pomarancio) where under his direction, he assisted in decorating the Vatican Loggia of Gregory XIII.
He gained his first independent commission when he was twenty years old for the frescoes in San Lorenzo in Damaso (now lost).
In 1595 he was commissioned to paint the ceiling fresco in the Palazzo dei Conservatori (Capitoline Museum) of the Battle of Tullius Hostilius Against the Veii (1595 - 1560).
From 1599 until 1601 he supervised the decoration of San Giovanni in Laterano, his fresco of the Ascension is at the main altar.
He became the favourite painter of Pope Clement VIII who gave him the title of Cavaliere di Cristo.
Not long after the Borghese pope Paul V succeeded Pope Clement VIII in 1605, the new pope's nephew, Cardinal Scipione Borghese — who was an avid art collector  — had Cesari arrested in 1607 and charged with tax evasion. This enabled the cardinal to confiscate Cesari's large art collection of 105 paintings for his own gallery at the Villa Borghese.
From 1610 Giuseppe Cesari was in charge of the decorations for Pope Paul V's funerary chapel, the Pauline Chapel, in Santa Maria Maggiore, where he supervised Guido Reni and Ludovico Cigoli.

In 1613 he worked on the casino of Cardinal Peretti-Montalto's villa in Bagnaia (now the Villa Lante) supervising the fresco decorations by Agostino Tassi and Orazio Gentileschi.
For a short time Caravaggio was apprenticed to Giuseppe Cesari where he spent time painting fruit and flowers.
Giuseppe Cesari has left behind a huge body of work in churches all over Rome. He died in Rome in 1640 and was buried in San Giovanni in Laterano.