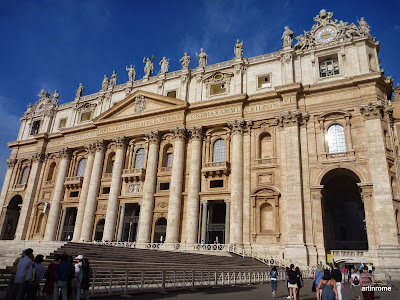 where: Vatican City
cost: free
audio guides €5 near front entrance, ID required
hours: daily 7:00-19:00, closed until 13:00 on Wednesdays for papal audience
what to wear: modest dress is a must or you will be refused entry by the guards
You must have covered shoulders, long shorts or skirts below the knee to enter the Basilica
There is also security screening at the end of the queue to enter Saint Peter's so don't bring any large items, umbrellas or backpacks


On any of my trips to Rome I must visit Saint Peter's. It doesn't matter how many times that I've been I always seem to find something that I have missed on my last visit.
I've also found it wise to go very early before the crowds and tours arrive. I avoid Wednesdays for the papal audience when the crowds are enormous, and don't be fooled into buying an entry ticket for Saint Peter's as it's free to get in.

Be prepared to be checked through a metal detector and you will be refused entry if you are dressed in what the guards think is inappropriate.

Saint Peter's Basilica was built over the supposed burial place of Saint Peter himself and there has been on a church on this site since the 4th century AD. Over the centuries Saint Peter's became decayed so during the 16th century Pope Julius II commissioned the construction of the new Basilica.
Bramante was the first chief architect. Michelangelo took over the project and it is his design that we can see today of the church and its enormous dome — the cupola can be visited and the entrance is to the right of the portico and for a small fee you can climb the dome and access the roof for a fantastic view of Rome and Gianlorenzo Bernini's square in front with the colonnades and 140 giant statues of the saints sculptured between 1662 and 1703.
Carlo Maderno designed the facade and statues of Christ, St John the Baptist and the 11 other apostles on the basilica.
Bernini worked on the interior of St Peter's for fifty years designing statues and chapels and creating the Baldacchino and the Chair of St Peter.
The inside of Saint Peter's is immense, decorated with marble, statues, gold stucco and mosaics.
When you first enter head to the right and you will find Michelangelo’s marble statue of  the Pietà, his only signed work. Unfortunately it is protected behind glass after it was damaged by a crazy man with a hammer in 1971.
The Chapel of the Sacrament holds the only canvas in the church, the Trinity by Pietro da Cortona.

The altarpieces were replaced with mosaic copies to preserve and prevent destruction by the incense and candle smoke that filled Saint Peter's. Some of the original artworks were taken to the Vatican Museum, Capitoline Museums and to Santa Maria degli Angeli.
The Treasury can be visited for a fee via an entrance in Saint Peter's and is worthwhile to see church ornaments and papal mitres and jewelery.
In the grottoes underneath the church are the tombs of many of the popes including John Paul II. With an advanced booking via email there is a small tour that can be taken to visit the catacombs and the tomb of Saint Peter underneath the Vatican.

Access to the Vatican Museums is outside Saint Peter's Square on Viale del Vaticano. Book tickets online to avoid the giant queues.