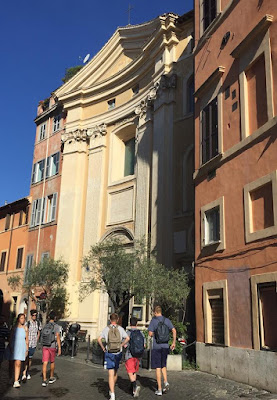 where: Via di Santa Dorotea, 23 Trastevere

getting there: short walk from the Porta Settimiana on Via della Lungara
open: mornings


Santa Dorotea in Trastevere was built on a place of worship dating to the 4th century.
The church was remodeled for the Jubilee year of 1500, at this time the relic of Saint Dorothy, patron saint of florists and gardeners, was placed under the high altar.
The church we see today is a from the final rebuilding in the mid 18th century. It was decorated in the late-Baroque style, with the ceiling fresco in the dome, sanctuary and nave dating to 1931.