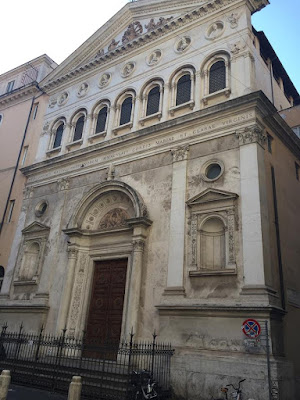 where: corner of Via Santa Chiara and Via di Torre Argentina, Pigna
getting there: not far from Santa Maria sopra Minerva
open: first Thursday of the month between 14:00 & 18:00


Santa Chiara is a small church in the rione of Pigna, not far from Santa Maria sopra Minerva.
The church was rebuilt in the 19th century after the roof of the original building collapsed in 1855.
It was named for Saint Clare of Assisi, founder of the Poor Clares and follower of Saint Francis of Assisi.
There is a notice on the front gate that the church opens on the first Thursday of every month.